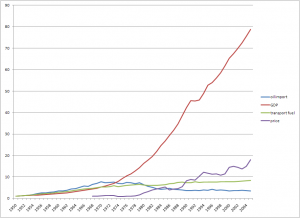 Sweden often claims it is demonstrating a miracle: that economic growth can take place decoupled from inputs of fossil fuel.

I am not so sure, and have been looking at the figures for myself. In a rather unscientific way I decided to plot trends to see if there was any pattern that showed up.

as economic growth has risen, so has demand for transport fuel. This may be because people can drive more, so they do (despite it being more expensive) or it may be because all the extra goods and services produced require more transport. Safe to say, the curves show that increasing GDP means increasing transportation. That bit of the theory does not hold.

something happened in 1970. Up to then, GDP and oil imports rose together. It may because  the dollar was decoupled from gold completely that the amount of money that could be created increased too.  Or the Government policy of becoming independent of oil worked – at least for other energy use areas.

use of vehicle fuel rose less than prices. This might be a reflection of increased demand in the world, as well as higher extraction costs. Again, as economic growth continues it looks as if energy prices rise. This needs to be analysed further as energy price is itself a component of economic growth I am unsure how the two factors affect each other. It would be inane to state that higher fuel prices cause economic growth.

Decoupling detractors point to the fact that imported goods’ embedded fossil fuel baggage is far larger than that of exported goods, and the real CO2 “bill” for Sweden is being payed in other countries, creating at least 20% more emissions than accounted for by domestic accounting.