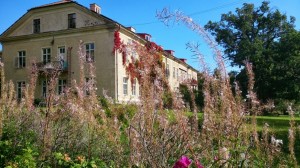 Lindsberg conference center, just outside the Swedish town of Falun, saw three days of Powershift Sweden with PUSH, a youth movement conference for action for a fossil-free society. As a fellow of ISSS (the Institute of Swedish Safety and Security) and one of the founders of Transition Sweden, I brought the complementary currency ITK to the seminar  as the conference’s volunteer currency.

The main theme of the conference was economy and climate. Erik Pihl, from Lund University presented his research into green economic growth. Jannie Staffansson, a representative of the Sammi people talked about how climate change is seriously affecting their reindeer herds and their way of life. Yoshi Frey, who used to work in the finance industry, covered how money is actually created and the consequences of creating money as interest-carrying debt. ISSS together with the Swedish Transition movement was invited to introduce its complementary currency ITK as the conference’s volunteer currency. Through having the currency as part of the conference, it was hoped that delegates would gain insights into what money is, how it works, and the energy that can be created if complementary currency is employed in the right way. 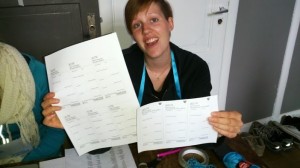 On registering delegates got a full sheet of ITK’s

This was the first time ITK has been used as a conference currency and a chance to learn from putting it into action. On arrival, delegates received a sheet of ITK vouchers. ITK stands for volunteer time vouchers in Swedish, (see earlier articles on ITK). Each delegate received a total of three weeks plus one sheet of 120,60,30,20,10 and 5 minutes. The vouchers issued totaled 7445 minutes, or 124 hours. This represents about a third of what it might be possible to volunteer during a whole year.

A little bit of maths around the vouchers is fascinating. The EU puts a nominal value on one hour of volunteer time at 175:- SEK. This means the vouchers had a nominal value of 21,700. As EU grants match volunteer time, the total value of the vouchers in a project (theoretically) would be 21,700 plus 21,700 or 43,400 SEK. Added up for all 90 delegates, the conference brought volunteers together with a potential of nearly 2 million SEK, or if matched by EU grants, 4 million SEK.

To give delegates a better insight into complementary currency in general, and ITK in particular, I ran workshops together with Sara Nelson from Lund. Sara had recently launched a honey-based local currency called Djingis. 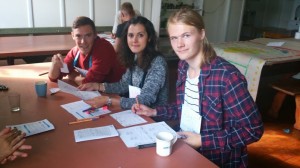 Making money (literally) as part of the Minutos game

Delegates played a version of the Minutos game (ITK is based on Minutos) where delegates role-play offering their services and goods for a number of ITKs and they simulate swapping ITK and goods. At the same time one group worked to collect donations of ITK to simulate how ITK could be used in setting up a local festival.

The simulation focused specifically on giving ITK for things that promote low fossil fuel use and are therefore climate- friendly. This can include a wide range of activities including:

Developing a community access economy could also be driven with the help of ITK.  By community access economy we mean where people share things instead of owning them. Setting up and running “libraries” of items such as tools, books, films and videos, computer games, maybe even fancy clothes, toys, sports gear etc. Essential to the concept of access and sharing economy is a collection point for people to bring items they could think of sharing, and either receive ITKS for them or people could pledge ITKS to the project for example to cover the volunteer time of running the project.

A lot of questions come up as they tried ITK out. Here are some of the major ones:

We created currency just by signing a piece of paper… how realistic is that?

Very realistic, this is how money is created by banks.

Surely the money is backed up by nothing?

The money is backed up by voluntary time, that when you issue it you promise to do the equivalent of one hour’s voluntary work.

How can you trust that people don’t just make a huge amount of ITK’s that they can never deliver on?

All ITKs need to be countersigned by people who trust you. They are not going to let you make a lot of vouchers that are not backed up. Anyway, this kind of currency runs on trust. If you try to cheat the system people will lose trust in you and refuse to take ITK from you if they don’t trust you.

How does ITK, or local currency in general, help climate and resilience?

Firstly, ITK can be swapped for things that are good for the environment.

Secondly, and perhaps more importantly, the community energy generated around ITK is inclusive. People like to be helpful and like it when asked to help. By getting involved, people can develop their skills and share their skills with others, They can develop vital infrastructure – everything from meeting places to market gardens, local electricity production to local newspapers. Should the community be challenged by extreme weather, economic downturn or accident, they are more ready to ensure food production, take care of housing and contribute to social cohesion.

Later in the conference, following open space sessions, representatives of development groups presented their projects. Delegates were asked to show their support for the actions by issuing ITKs for the project of their choice and handing it to the group.

The ITKS were collected, sent to the front, sorted and counted. It was a way of “financing” a project. The Fossil-Free action plan got the most ITKs.

What did we learn?

The launch showed that ITK currency can be used to energize volunteer projects. The process of posting what you can offer, being asked to donate time, and being assigned to tasks all bring energy to projects.

It also demonstrated one of the other useful properties of currency: that it can be used as a unit of measure. This was just a trial, but if the currency had been live, the total number of hours donated to projects would have represented the interest and capability to “invest” in projects. It would also have encouraged project members and others around the projects to swap things with each other outside the project.

For the moment, ITK is available in Swedish only. Other versions are under development. For more information contact ISSS via their website.

The Institute of Swedish Safety and Security