Transitioning away from fossil fuel: society is like an amoeba.

I spent a pleasant afternoon in the Swedish Town of Uppsala with the Upplandsbygd regional development organization and people involved in the Transition Towns movement from Sweden (Uppsala) and Scotland( the town of Fores) in a workshop that looked towards both regions’ development up to 2020.

The workshop was organized as part of a cooperation to, among other things, help improve the results of local efforts towards Transition and local food. (Transition Towns is a local action movement aiming to create communities that are resilient to challenges coming from the expected shortfalls in fossil fuel provision as well as disruptions like drastic economic downturn.)

After a few exercises to get to know each other a bit better, we turned to telling each other stories of what has worked for us, and what has moved us. 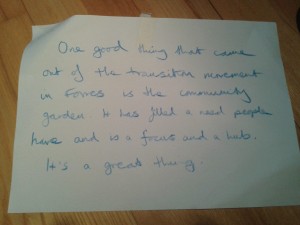 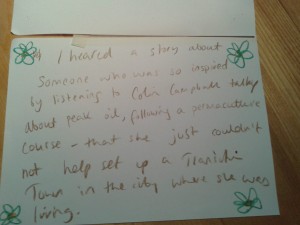 One person found out about Peak oil from one of the original Innovators, Colin Campbell and went ahead to start a Transition Group locally

We then heard from one of the cooperating partners, the Institute of Swedish Safety and Security. Chairman Philip Wyer presented the Safety and Security Industry view of developments and their relation to local and regional development. We will publish an account of this presentation shortly. (See more information at the end of this article)

We then went on to think about the society we would like to see in 2020, looking at food, housing, energy and transport, and culture.

You can see the results below. 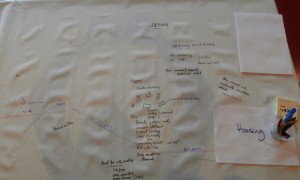 The dream is creating housing for all, energy efficient and adapted to climate and landscape. 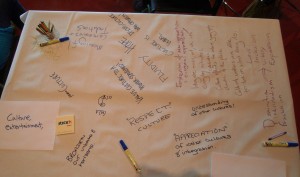 Developing a culture of inclusion, healthy and healing 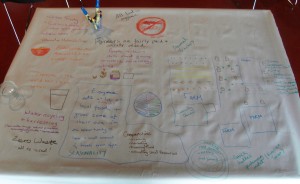 Locally -grown food, and a fair wage to farmers. 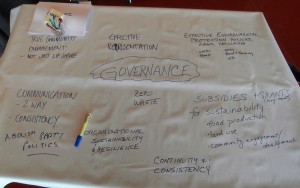 Politics that reflect protection of the environment. Sustainable production should be economically viable. 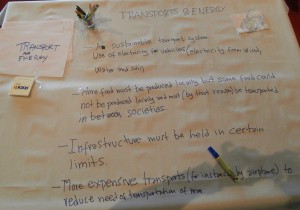 Following on from that we looked at how the societal change might come about, using Alan AtKissons model of the Amoeba. It feels like a relevant model for Transition, and has been tried by a few groups earlier. 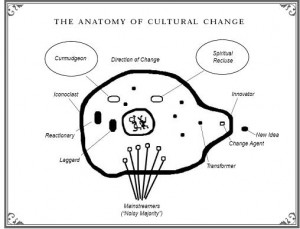 Basically, the model says that social change is like an amoeba. To move (change) the amoeba puts out a small “foot” and then the rest of the amoeba follows after. The model says that there are different types of people who are important to change, and we looked at some of the major categories:
• Innovators, at the edge, coming with the new insights
• Change agents, first into the “foot”, able to convey the message of the innovators in an understandable and compelling way
• Transformers, showing leadership of groups, able to mobilize their energy
• Mainstreamers, the ordinary person who will come along when everyone else seems to be
• Reactionaries, who are invested in NOT changing
• Laggards who will resist until the last minute, but do not want to be left behind.

In a form of constellation exercise we talked out way through some of the roles. In Transitioning away from the fossil fuel dependent society, Peak Oil experts, Local Economic development innovators, Climate experts, as well as visionaries like the Occupy movement and especially the people working with alternatives to economic growth are all innovating on this edge.
Interestingly, Uppsala is the home of the Uppsala University department where Swedish Peak oil expert professor Kjell Aleklett works. Despite his academic standing he has largely been ignored in his own country, like many other innovators.

We saw how Transition founder Rob Hopkins, has acted in many ways as a change agent. His folksy popular way of talking about Transition has brought the idea down further to the ordinary person. Rob has been able to put the narrative together of both climate change, peak oil, and the “planet care, people care, fair share” ideal of Permaculture in a way that appeals to many.

However, Transformers are needed too. In Scotland and in Sweden, several individuals have started local Transition Initiatives together, forming core groups to bring in others to support further development.

Our conversation turned to thinking about how to get more mainstreamers on board. Transition in Fores had just got a community center, and were arranging informal meetings and I believe a party was planned. We realized that mainstreamers go to things when their friends go, so this maybe gives us a clue, that if there is a good energy around gatherings, people will go with their friends. Having something to show increase attractive as does anything around food. (If you offer free food, Swedes will come, someone said.) The subtlety of being appealing to the masses was very interesting to explore. Good energy and respect were like magnets, but low energy and stress held people away.

No deep revelations here, but it was an interesting exercise, I suspect the insights will continue to work in the back of my mind. A big thanks to all the Transitioners who joined in and the arrangers, RUCOP and ISSS.