Article updated June 6 after consideration of all the recent comments

We are stuck. On the one hand you have people who talk about economic growth as being the objective of policy – necessary to be able to pay back debts and achieve prosperity. On the other hand, you have the sustainable camp that claims infinite growth is impossible and therefore the whole economic system is bound to fail as it relies on it. You have people who claim we need GOOD growth as opposed to BAD growth. Bad growth would be the increased economic activity due to storms, break-ins and failures of products. Either way, the term capitalism comes up as if it were a system. Perhaps if we explored the idea of developing our thinking about capital we might find some ways forward.

My aim here is to clarify the idea of using capital as a central social planning approach, using the idea of settlement  maturity. This is the idea that settlements, and the societies in them, like an eco-system, can mature.  If society can mature, then maybe its  capital profile will mature too.To be able to take this analytical line we need to understand first what ecological maturity is.

Let us look, then, at how nature grows and see if we can find some insights into how capital can grow, and what economic growth would look like through the eyes of sustainability.

There is still growth in mature eco-systems. Trees still grow, albeit slower. However, for the system as a whole there is little net increase in biomass.

Ecologists describe how all eco-systems strive to become mature.  You probably have the idea somewhere in the back of your mind, how smaller animals give way to large predators, small plants become forests, rushing water becomes a swamp, etc.

One well-known description of maturity comes from the ecologist Odum,(ref 1)  (table below)

Let’s take it bit by bit:

We now need to explore the idea of capital.

The diagram below breaks down the categories of capital often used.

The categories should be  be self evident. But from the point of view of accounting, human capital and social capital are not normally put on the books.
Financial capital is divided into that owned by the organisation and that borrowed. In English the terms foreign capital is used for  money lent and equity is the money put into the company by its owners.

Now let us apply the idea of maturity using the idea of the built environment; a settlement. 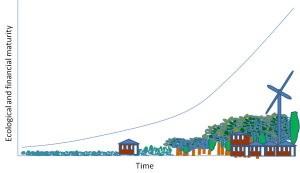 An immature settlement might be a few tents that settlers might bring with them. They have no agriculture, there is no infrastructure, but they are surrounded by the bounty of nature and can begin to convert, for example, trees to buildings.We can envision an immature settlement, but can we envision a mature one? Surely our cities act like immature settlements: nutrients are lost to surrounding environment, metals and minerals end up in tips, and even our building reflect heat rather than gather the energy from the sun. The list below is an attempt to bring together ideas of what a more eco-mimicking city or settlement might look like.

GROSS PRODUCTION. Here we would see the production of buildings and transport infrastructure as complete, only repair and upgrade would be needed. Most production activity would be turned to food and heating and lighting.

BIOMASS SUPPORTED. The mature settlement would have a high level of biomass supported in the form of tree, and food -producing facilities.

TOTAL ORGANIC MATTER Total organic matter would be higher, to provide eco-system services like shade, energy capturing, building and clothing materials etc. A field does not represent this vision, we would expect more organic matter intensive methods, like forest agriculture, food forestry, would be used.

SIZE OF ORGANISM. It can be imagined that in this case, for a society organism means body, like an organization. As society matures, more specialized and larger organizations can provide efficiency of scale and specialization.

NICHE SPECIALIZATION. People could have more specialized jobs as society matures. Early settlers might need to master a broad range of tasks without being able to go too deeply. In the specialized society everyone could master subjects deeper.

MINERAL CYCLES. It makes sense that an immature society digs up iron and other materials to get started. But after a while, the extraction of these substances can become polluting and maybe lead to scarcity. In this case, minerals already extracted should be recycled ad not released in to the biosphere. This approach is being pioneered by the natural step and Cradle to Cradle. The mature settlement is a mineral recycling society

NUTRIENT EXCHANGE RATE WITH ENVIRONMENT. The same here as for minerals. The mature society will retain nutrients for recycling, and do the surrounding environment a favour by not putting this burden onto it, as well as minimizing the work needed to obtain nutrients. These building blocks of life can stay within the settlement. More are only needed for growth.

ROLE OF DETRITUS Early settlers could make waste without it creating a problem or being seen as a loss of valuable resources as there probably were not much of them. Not so for the mature settlement, where the amount of biomass is high. Detritus is a resource and in the mature society there may be much of it. It can also accumulate and be a pollutant. So it needs recycling. This will mean a soil to soil perceptive for food systems – from soil to plate back to soil.

What we are describing, then, is that the concept of economic growth is not an end in itself but the process by which economic maturity is reached. At this point, capital is accumulated, analogous to the build up of bio-mass in the mature eco-system.

The effect on capital.The diagram below illustrates how capital is converted and increased in the maturing society. 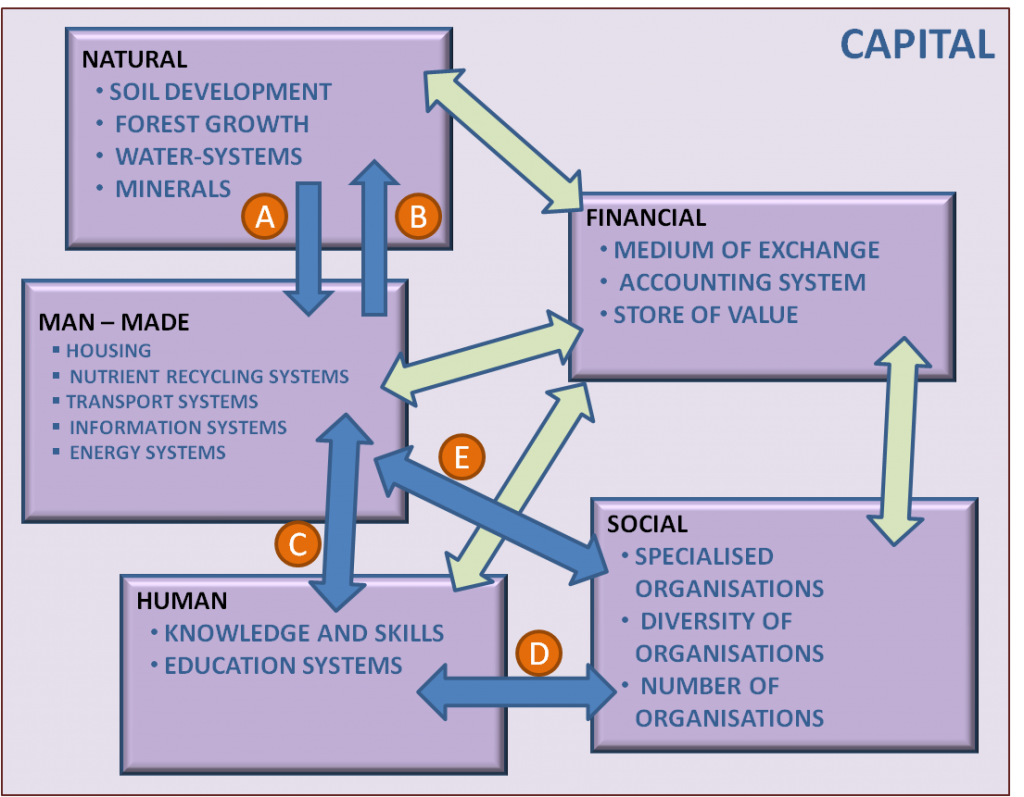 Social capital, the development of organizations (D), would in turn be needed to run, organize, and develop the man-made capital (E) and natural capital(B).

The role of Financial Capital. In this diagram, money represents an accounting system that has significance in that the value of the whole increases over time. (If all forms of capital can be valued using the same system of measurements.)  As the system matures it will accumulate biomass and minerals for recycling and organizations that accumulate knowledge. An accounting system could be developed that calculated in this way. Growth would slow down as the settlements matured-  I leave it to later articles to explore how such an accounting system might work.