It’s nine o’clock in the morning at the Transition Conference and time for Pattern Language. This is what I came here for. The new Transition Handbook will be based around pattern language, and as a member of the steering group in Sweden I feel it is imperative I get a handle on it.

Although I must admit it got off to a strange start. Sitting in a circle, we were all asked to express our feelings about how it feels to be a man/woman and how in my case, being a man can contribute positively to Transition. I get overwhelmed by my experience of living in Sweden where you get the feeling from many a woman that your manly attitudes, ways of thinking, predilection to follow your hormones rather than feelings and inability to put the toilet lid down are the root cause of all of Sweden’s troubles today and that if we would just get out of the way and let women show us how to do it all would be well.
I open my mouth to blurt out my inferiority complex and realise I have come to the wrong meeting. I am in the one about gender issues. I mumble something apologetic and start to leave, being followed by a couple of others. So I am relieved at least I am not the only one.

Stumbling into the pattern meeting I find a chair to join a conversation already under way. The twelve steps of Transition – or twelve building blocks – have stood us well. We make an inventory of their usefulness so we don not throw the baby out with bathwater as they say.

Then into pattern language for Transition. I must admit I looked it up on the web before the event and it was one of those “read but not understood” things. I must have the learning style that needs someone to explain something to me before I “get it”. Several times probably.

I think I get it now. Pattern language is a book about architecture where each element – starting from the countryside and going down to details of a kitchen – is described in terms of best design practice in enough detail for another person to be able to use it in their work. It’s kind of like making an encyclopaedia of effective design. And it feels like it’s in its infancy – for Transition at least. The task is huge: how do you, community by community, rearrange your living arrangements to be resilient to the coming fossil fuel scarcities and climate changes? The starting point is the Industrial Growth Economy, into which, every moment on this Earth, people are pouring hours and hours of development, research, discussion, education, etc. Suppose every fibre of the systems that make up our society were brought to address just this task of designing communities for resilience? What would that look like? Anyway it’s not like that. Ninety-nine point nine, nine (you get my drift) percent of the world is focusing on tinkering with the industrial growth system. And somewhere, buried in the Devon countryside you have a growing cadre of grass roots volunteers going at it, and having fun at the same time. I can’t help feeling that we might just make it. Very few thought man could fly, and just a few people, bicycle makers, proved them wrong. Now, very few think we can NOT fly! 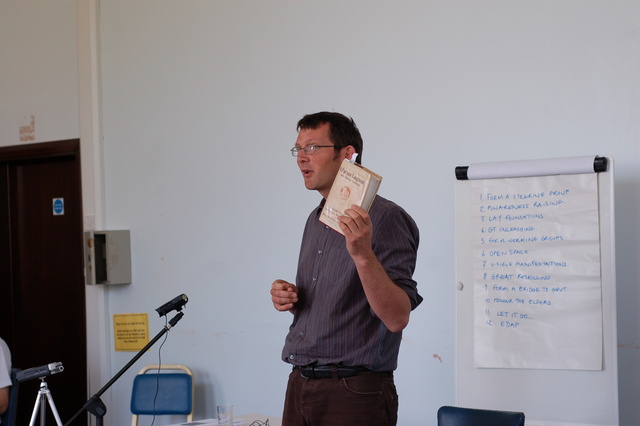 Rob Hopkins shows his copy of the book,

I have seen something like pattern language before in the Ericsson project design manual. Each element of project was defined as milestones and what you needed to have achieved at each milestone was clearly described under each milestone. Relationships to other milestones were also given. On the other hand, how well each step was performed to contribute to a successful end was maybe not so well defined. I wonder, what “pattern design” language would have been necessary for Ericsson to have made beautiful, user-friendly, environmental friendly, good value mobile phones?

Anyway I am a great fan of just getting on with it. You can’t improve something that does not exist, so bringing something into existence, however clunky, is better than nothing. And it is a lot of fun just creating a first draft or prototype – out of post-its, string, and cardboard, whatever.

The last part of the pattern session was spent with post-its leaving comments, suggestions and generally working up the whole thing. On the one hand you could ask yourself why even attempt such a monumental task. The product will leave most people cold. On the other hand, if we don’t do this – who will? And if we all contribute a little, maybe we can make it happen quickly. Certainly, the Totnes Energy Descent Plan is a crowd-development – involving many from individual householders up to local government and businesses. Without that kind of involvement it would just not have happened. Or maybe a few could have written it, but it would lack practical meaning.

In a conversation in front of one of the posters for one of the patterns we wonder why news programmes look like they do. The pattern is often bad news divided under world news with number of people dead, number of unemployed and economic growth indicators measured in monetary terms, local news again number of people dead, business news with stock market figures, sales figures, sport with scores, weather, with rainfall and temperatures and wind.

In the resilient world news would be about what is important – progress towards resilience,
Bad news

The pattern session ends for me with a discussion of the semantics of pattern language with a linguist. Fascinating. I resolve to try  to help out if I can.

Back in the main hall, empty of chairs, we work in small groups of abut six to envision what the next five, ten, twenty years will look like, bad and good. We take flip charts and scribble and draw furiously. Then some of us stand back-to-back in threes and hold the flip charts up. 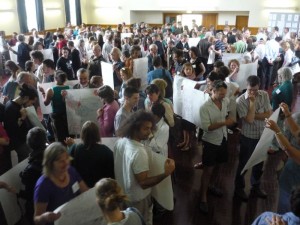 As I walked through this huge “art exhibition” I saw recurring themes. Most people in the room carry a general, shared understanding of what is ahead. 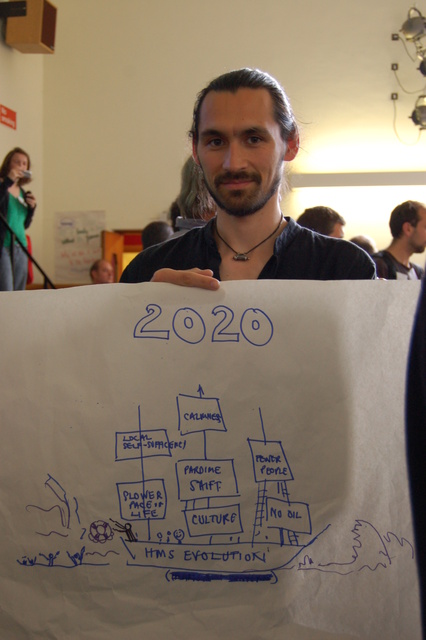 There seems to be a collective understanding of how we are living in a world that is ignoring what is important, and that if we do not adapt, we are likely to see increasing difficulties ahead. One theme was the growing negative impacts of climate change, peak oil and economic system dysfunction. The other was the engagement of grass roots in creating local cooperatives, housing solutions and energy supply.

I opted for the Heart and Soul workshop in the afternoon, glad that I was able to shift from the hard fact-based (male?) pattern language and scenario development to looking inward to me as a human being, enjoying my time on Earth, responding with love and affection to others, to reaching my intuition as a guide forward and learning how to incorporate heart and soul into every aspect of Transition.

After dinner, I went to my room to leave my notebook and get my computer. Lay down on the bed to rest for a few moments, considering which local brew of English Ale I would try tonight, I fell asleep, thoroughly exhausted by all I had taken in. I woke up at midnight still in my clothes. Still, I would be well rested for day three. Day three hold a whole new dimension but more on that later.