The citizen pays all, whilst what she wants is taxed and doesn’t want is allowed free. 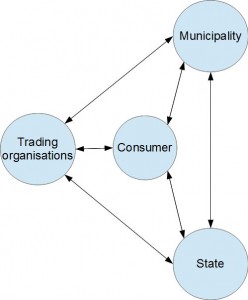 The engine of the economy is the consumer citizen.

Preparing a project to explore the finer art of taxation I created this diagram to illustrate the various fee and tax relationships that exist between the entities in the political economy.

Some rather striking things emerge from this simple diagram: there are a lot of transactions going on, separating them all out from each other is going to be a major task.

Another thing that strikes me is that the consumer, whilst being in the centre of the economy, is actually surrounded by the corporate-state economy that she is actually fuelling.

Let us consider what the average citizen wants:

To live in a society where everyone has a job.
Situation: work is taxed heavily in most countries

Situation: whilst work is taxed heavily, it is much cheaper for corporations to replace work with automated, fossil-fuel powered machines. In general, it is more profitable to sell things newly made than services or repaired goods.

Situation: most transactions are taxed with VAT or sales tax, in Sweden 2o% of what individuals pay is tax.

To live in a clean environment

Situation: companies supplied by long supply chains leave behind  massive pollution for every kg of product they sell or every unit of service they provide. The fees paid by companies for recycling and waste are only a tiny fraction of all the other taxes.

Situation: the tax framework makes it more profitable to mine iron and other metals anew than to recycle existing materials

To have politicians deliver on promises

Situation: there are no bonuses or taxes on politicians beyond those for normal citizens. Regardless of performance, politicians get paid. The politician role comes with generous pension rights, too.

The political economic system is something we inherited from the the century before last. It is well due for an overhaul. A good start would be to collect revenue to run public services by putting fees on things we want less of.

Read more in Capitalism: a hobby