Japan may bring us all down 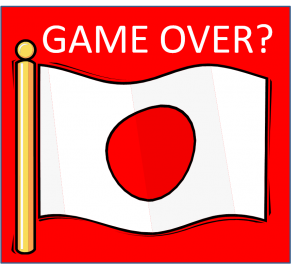 In shock I watched videos of the tsunami devastating towns along the coast of Japan. And incredulously I watched the explosion at the nuclear power plant.
What are the chances of a nuclear melt-down in at least one of the five plants along the coast each with several reactors at it?
And, as this is the third largest economy in the world, what are the chances it will affect the rest of us?

Strangely, these two risks combine to create an insidious worst case scenario: This worst case would be where the world accepts that nuclear power is inherently unsafe, but facing world economic downturn, it accepts that we must take the risk in order to restore economic growth.
This is worst case because it forces people to accept the underlying values of the industrial capitalist economy – that risk taking with natural systems is justified for the greater, economic good. There will of course be justifications like; “now we have learned enough to contain melt-downs”, or “we have to live with risks like this or go back to the stone-age,” and anyway “you weren’t complaining taking those 15 minute showers”. It is a bit like smoking, except instead of banning it because it is recognized as unhealthy it is encouraged because the benefits far outweigh the health risks.
This would be a severe humiliation for humanity: to acquiesce and let economic power trump planetary stewardship and respect for human life. It would set a precedent that may change human ethical DNA forever. We would be admitting to slavery.
A second scenario would be where the risks of nuclear power are recognized to be greater than what is reasonable for world citizens to bear. However, the paradigm of the Industrial Capitalist Economy is still retained. Not a good move as we are at the peak of oil production. This would result in a world recession, increasing inequalities and widespread energy poverty.
The only reasonable scenario as I see it would be for world citizens to recognize that nuclear power has been proven de facto to be inherently unsafe. Along with it, drilling for the last few barrels of oil has proven to be unsafe. Given that we are at peak of oil we should abandon the paradigm of industrial capitalist growth economy and explore alternatives whilst we still have industrial infrastructure that can serve to feed and house us. We must accept the low energy economy and low energy future. This does not mean we should be ready to accept low standards. We can live comfortably on what we have available today.
It’s a bit like the people calling for an interim government having recognized they no longer accept being quashed by the dictator. We refuse to go back to dictatorship and refuse to belive the alternatives are worse. We went to the moon. We fly. We CAN live on sunlight, wind, tidal power and a minimum of fossil fuels.
There are some simple things world citizens could call for: the introduction of the permaculture ethical principles, Earth care, People care and Fair share. We could start by introducing a base level of equality into society. For example, in terms of a ratio between the highest and lowest paid, or to ensure everyone gets a minimum tax exemption, negative in some cases.
The other thing to call for would be an end to the monopoly of money and the right to charge interest. Systems need to be designed that do not encourage accumulation of wealth. They should be designed to discourage externalization of pollution costs.
This is the time to stand up and be counted. It is time to put an end to the madness of pushing the risk envelope so far as to endanger life on Earth as we know it for the benefit mostly of capital owners. We are already pushing the boundaries too far. It is time to say NO to the very fundamentals of our economic system and demand change. Say NO to trying to patch up the world economy after Japan. Say yes to finding more human alternatives.