The world of work: what are the options? 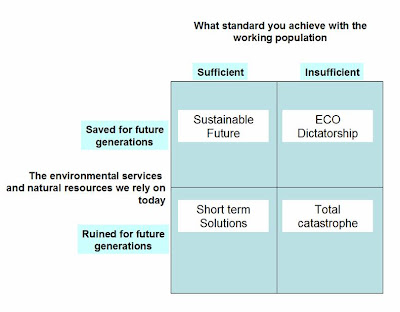 In my last post I pointed out what must be obvious to many – that work is not working. Too much work is being done to create financial wealth, and too little is being done to secure a sustainable future for coming generations. If we have a world population of 6 billion, say a quarter of them are in work. The others are too old, young, sick or plain unemployed.

Let’s try to make it even clearer by considering the options. On one dimension the impact of work on ecological services provided by nature. Either it will decrease or maintain them. And then you have the dimension generating a standard of living, either work creates an acceptable standard or not.

That gives us four options. The absolute worst one is where work depletes the environment and we don’t create a standard of living worth having. Sadly to say, that is the position we are in today. The United Nations millennium report clearly shows the state of environmental degradation, and levels of Carbon Dioxide in the atmosphere are dangerously high already according to some scientists. We have a lot of people starving and a lot more in danger of starving.

Let’s look at this in more detail We’ll use rounded figures for convenience.

Starting from this situation we need to find a better option. Increasing protection of the environment is a GOOD thing. But in practice, if stricter regulations are introduced without the guarantee of living standards being provided, the end result would be even more hardship.

The only sensible option to aim for is then securing a standard of living whilst preserving environmental services. That in my opinion requires rethinking work. But that is a very appealing challenge. My earlier envisioning looked at “the go along society”. We could do a whole lot worse.