Poverty is telling you something: your turn is coming.

For my part of Blog Action Day I would like to discuss poverty and sustainable development. We live in a world gone mad. By the hour, the ranks of the starving are swelling. Whilst we stare into an abyss of depleting mineral and ecological resources, pushed from behind by population pressures and the voracious needs of the economic machinery we call business as usual, all we can talk about is how to get more money into our system. Let’s just take a few seconds’ time out from this insanity to look at sustainable development. Is sustainable development a solution for poverty?

Let’s start by giving you my view of sustainable development – a simple subject really. Take a geographically defined territory and look at its ecosystem – how the energy from the sun is captured by plants and how the animals live and how water and nutrients cycle around. Next, look more closely at how the animal population is doing, maybe analyzing their behaviour and their interaction with its surroundings. These basic observations will give you some idea of how likely the population will fare as time goes on.

Suppose we were to look at an area of forest and the apes living there.

Numbers. The population is breeding rapidly, numbers are rising exponentially.

Trees. Hmmm the forest is being depleted faster than it is managing to grow back.
The state of the population. The apes seem to be doing OK, or are they? Closer examination reveals 15% are in a bad way, they are starving. Even more, 17% or one sixth are frequently sick due to drinking infected water. An even greater percentage are overweight.

Nutrients. The area is leaking water, phosphorus and other essential minerals.

You don’t need to have a degree in advanced systems ecology to see the population of apes will soon start to die off. The forest they rely on is shrinking, and loosing nutrients; they already cannot feed themselves. With our sustainable development glasses on, we take a look at the behaviour of the population for some clues as to what is happening:

In some ways, this behaviour makes sense: a stressed, hungry population will breed more, perhaps sending its offspring away in the hope they will find a better place to survive in. And the well fed population destroying the very trees it lives off – if there are many, many trees and very few apes it probably would not make any difference. And it makes no sense, from a survival point of view, if they all starve.

Anyway, the outlook for the ape population does not look good. Unless there is some kind of intervention, a radical interruption to the growth they are undergoing, and a rapid behaviour change, we are likely to see a population crash. This would be typified by a rapid drop in numbers to a mere single digit percentage of the original population.

And now to poverty. Poverty is typically defined as having two or less dollars a day to live on. But from a sustainability point of view, we define it as not having adequate shelter, clothing and food to have the capability to develop towards prosperity.

Now we turn our attention to the status of the population of the world. Of the 6,7 billion on the Earth, estimates say 880 million are undernourished (13%) and 1.4 billion (20%) are without adequate food supply. (1.1 million are overweight.)

Our own eco system is under pressure: we are losing forests, water supplies and fertile soil by the day, not to mention that carbon dioxide is accumulating in the atmosphere possibly destabilizing our climate system.

The mineral sources we rely on are also depleting. Some estimates say we have used half of all recoverable oil (the easy half at that) and more than a half of coal. Phosphorus, essential for fertilizers has 30 years left.

Behaviour: it seems man’s attention is turned elsewhere; to making money. While ecosystems and minerals deplete, money is growing.

(Strangely enough, although money is growing the poor are getting poorer.) 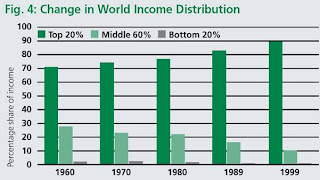 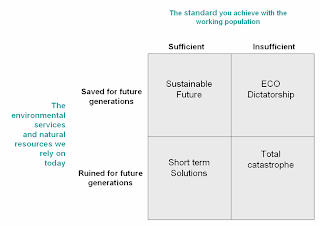 Faced with choices, we can either aim to preserve minerals and ecosystems or not. Based on our view of man we can aim to provide a standard of living for all or not. This gives us four basic aims. Sadly, current behaviour points to destroying ecosystems and not being able to feed everyone anyway.

Other things that are growing: number of economics prizes to honour the memory of Alfred Nobel , the number of trained economists, scientists, and the number of research papers on all topics including poverty. Interestingly enough, as more prizes in economics are awarded through the years, (39 so far, one was awarded yesterday) the higher the number of homeless grows in Stockholm city(3800, about one for ten) – a short distance from the site of the award ceremony. So poverty is telling you something: business as usual, with its celebrated and rewarded intellectual prowess, cannot be trusted to act as a responsible steward of eco systems. It can’t even feed and house all the people in developed countries.

As with our theoretical population of monkeys, the outlook is not good. There is nothing in our current behavior to give hope that poverty will alleviated and everyone will have food, water and shelter. Not only that, there is nothing in our behavior to show we have the capability to address the inevitable shortfalls due to population pressure on a finite planet. On the contrary, the current behavior is to concentrate on finding ways to increase the flow of money.

We may have already hit our first physical barrier: oil. Cheap oil supplies have peaked and been on a peak since 2005. But demand is continuing. In fact, without pumping large amounts of cheap energy into an economy, it cannot grow. There may be some small margin where efficiency gains compensate shortfalls, but how far can efficiency gains go? Increase in demand, scarcity of availability leads to increased prices, slowing down economic growth.

Population crash or rapid intervention? Try this for yourself, in either case you are probably looking at facing poverty in your life time. Look at where you are now and the way the world situation will affect you as population demands hit physical limits. Think. Where do you want to be? What might get in your way? What qualities and skills do you need to develop to be part of the change?

We need to put the brakes on and we need to do it soon. The monetary system has collapsed, the energy supply system is next, followed by food and water supply. What can you do today?