Story from the future: City without cars

Summer, 2029: Taking a walk around the sustainable city of Porena is like taking a step back in time.  Porena is the first city to go sustainable and car-less. Now most cities are walking cities, thanks to the peaking of oil production. As I walk around the city, it is hard to imagine how bold the citizens and developers must have been to have started to transform this mediocre place into a showcase of sustainability –there was nothing like it at the time and back then, it was still the done thing to race around in your little, or big, car. 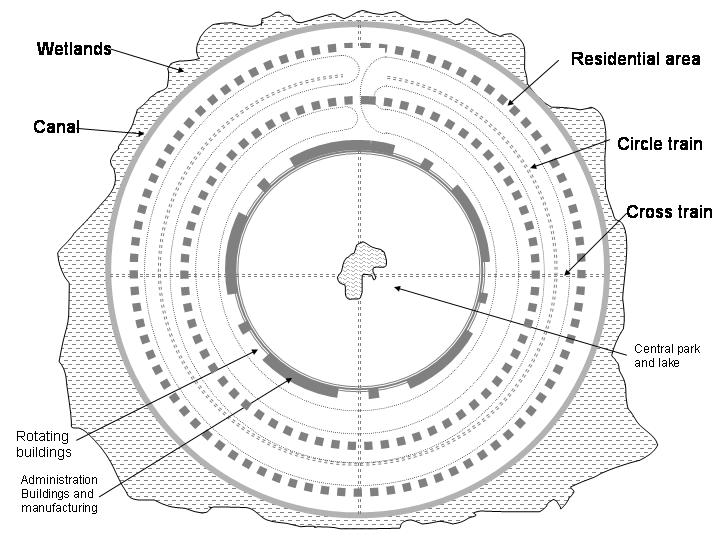 Seen from above, Porena looks like someone has drawn a mandala- a complex circular design – using houses, paths and buildings. Starting from the park in the centre, encircled by administrative buildings, the city transitions to the residential area stretching to a peripheral canal.

Electric trains/trams cross North/South and East-West. These intersect with a circular line  going round the inner part of the residential area.

Not only trams go underground: so does all freight. Porena sits on a network of underground freight pipelines. These carry automated trucks that move continuously under the city.

When you need to send something, you push a button at your nearest loading station and an empty truck appears. You load it and code it with the destination, and it travels around the system until it is ejected at its final stop.

;The idea is to make everything close to everything else. The combination of walking and taking the trains should provide you with nearly all your daily need of 10,000 steps and make sure most journeys are under the hour. And anyway, a freight stop is always located close to your residency or the administrative area.

If you have difficulty walking, there are small electric vehicles of the type found in airports, to help you get around.

And to make it even easier – the central administrative buildings rotate! They sit on large rails, with powerful electric motors driving them. The motors get their power from the solar cells on the roof of the building. For example: if you need a doctor’s appointment, the surgery comes to you during the day! The buildings revolve at walking speed. If it’s raining and you need to go somewhere, you can walk in the direction the building is rotating. In effect you are going at double walking speed.

You might be wondering how large PORENA is – to be a city and for everything to be close to everything else. Well you need some nifty mathematics to understand what I am saying. But before we reveal the maths, remember that some 40-50% of a city’s area is taken up by or for the car. If you remove the care you can make cities much denser.

The mathematics is called radiality, the practice of designing settlements around circles. Porena has nearly one million people! And this is in an area of radius 9 kms.

The population density, on average, would be worked out like this:

The area of Porena is:

Multi-functionality Firstly, to make the city as efficient as possible, population density is kept high. For the area to provide comfort and convenience requires the multiple use of land: multi-functionality.This is manifested in several ways, for example all green areas are available both for recreation and growing food. Wetland areas are used for water treatment as well.

For natural water circulation, run-off and cleansing to function with minimum contamination and obstruction, automobiles and trucks are removed and paved, asphalted roads and paths are replaced with gravel.

For walking to be facilitated as far as possible, buildings are stilted so people can walk under them.

Outer circular canal Water-born transport is effective for heavy loads, one solution to bringing goods to residential areas is to use barges sailing around a peripheral canal.