Capitalism a hobby: attempting to understand the role of money in capitalism 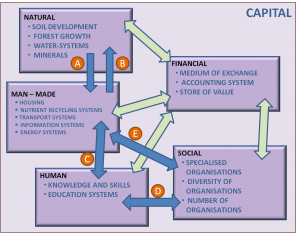 The conversion of capital from one form to another

Continuing with my hobby: capitalism, I have come as far as defining different types of capital. Please note that I have not yet taken on the task of actually defining capitalism. This is getting to be a life-long hobby instead of a temporary fad.

To take the analysis one step further let us consider the conversion of one form of capital from the other.

Let’s start with natural capital, encompassing soil, forest, water and minerals like iron as well.  Natural capital feeds (a) into man – made capital, for food, water  and housing systems, for example. Man-made capital feeds nutrients back into the natural environment, to allow growth and ecological maturity (b).

Human capital includes  know-how (could be called technology) is applied to produce man-made capital like housing and transport systems  (c).

Now. Where does money, or the store of money called financial capital come in?

As an accounting system

According to my studies,  money should act  as an accounting system.  So you would think that it would keep track of the capital conversions, to provide an overview to ensure that capital conversions promote ecological maturity whilst ensuring a standard of living for all.

Call me old-fashioned, naive or what, but I cannot see how money is doing that. Or if people are using money to do that.  If it were, we would be seeing the status of capital conversions and system performances trounced on the news regularly. We don’t. We see only financial measures of financial wealth, like the value of the stock market.

As a medium of exchange

Here I think I see some use of money in capital conversion. As owners of “bits of capital” swap form(like using money  to buy the expertise of a builder who converts natural, human and man-made capital to more man-made capital)  or indeed bits of the same form (Like  a university that buys a lecturer’s services). This creates another problem, though. The way money is created as credit it is hardly a representative means of exchange. A person who borrows to build a house and then sees the house repossessed by a bank sees capital being created out of nowhere, converted to man-made capital and then the man-made capital changing hands using the money that dis not exist from the beginning.

This is one of the central problems of today’s money system: it is useless as an accounting system that counts anything of real worth, and that it is at best, dysfunctional as a means of exchange if it is created as credit out of thin air.

2 thoughts on “Capitalism a hobby: attempting to understand the role of money in capitalism”