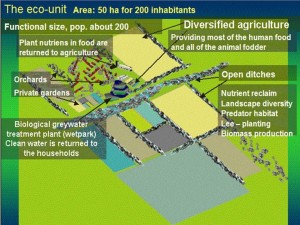 Despite the widely held faith in the efficiency of free markets, the industrial capitalist model has arguably failed to deliver. Specifically, it fails to provide lasting economic security, food and shelter to large percentages of the world population. Furthermore, despite being blessed with the easy availability of massive amounts of fossil fuel, many countries are heavily in debt, threatening to burden each and every citizen for a long time to come.

The total land mass of the Earth is about 14,8 billion hectares. With a population of about 6,8 billion this means there are just over two hectares of land per person. Of this, only one hectare of land per person is habitable. We need to rethink what we invest in.

Whilst land is scarce and getting scarcer, so is oil. Figures from several sources indicate world oil production has reaches its maximum and is likely to fall per capita in the near future.

END_OF_DOCUMENT_TOKEN_TO_BE_REPLACED

Many people dream of living in a way that burdens neither nature nor their personal finances. They seek a sense of closeness to and connection with nature. We have developed a course to help.

END_OF_DOCUMENT_TOKEN_TO_BE_REPLACED

This document provides a broad definition of an  Eco-Unit to act as a starting point for people wanting to develop their own eco-village. I believe it can help development of eco-villages if the owners and administrators can agree at an early stage what it is they are aiming for. A document like this sets up Read more about ECO Units: a definition document[…]

I have seen several experiments carried out where vegetable beds clean grey water. I was curious to see if I could imagestream a good way of doing this so I could experiment myself on the Eco-unit. <more links> I felt I needed clues as to how I could move forward. I tried to frame my Read more about Grey water recycling imagestream[…]

I can’t remember where I heard about it, but there is this idea that you can grow all you need in a Forest. Agriculture as we know it – huge areas of monoculture using a lot of fossil fuel – could be mostly replaced by people just going into the forest and getting what they Read more about Self-pick woodland gardening[…]

In May, 2009, together with five others, I purchased a horse-farm about one and half hour’s drive out of Stockholm, Sweden. The intention is to transform the site into a co-housing combi-farm, or Eco-unit. View pictures of the farm here, and learn more of the background to what an Eco-unit is here. To get started Read more about Our Swedish Eco-unit: baby steps[…]